Discovering and Using Your Emotional Intelligence

I mentioned in last week’s blog (and with Inside Out from Pixar earning big bucks at the box office), Emotional Intelligence (EI) is a major factor in your success as a librarian because it affects your ability to communicate.  I didn’t go into detail about what EI is and why it is so important because it needed more space.  So here is an introduction to the topic.

You can probably make some valid guesses as to the meaning of EI, but some of its components are likely to surprise you.  In 1990, Peter Salovey and John Mayer published an article entitled “Emotional Intelligence” in Imagination, Cognitions, and Personality.  The business world took note of it and today you can find many articles and books on the subject written both by psychologists and business people.

Educators have been slower to discover EI. It is usually divided into four areas: Perceiving Emotions, Reasoning with Emotions, Understanding Emotions, and Managing Emotions. You are likely to be better in one area than another, but all four are important in helping you send messages that are heard and not be misunderstood by others.

Perceiving Emotions requires Active Listening and Active Observation. It is likely you have come across Active Listening before.  It entails focusing on what is being said rather than contemplating your response.  Nodding and saying things like, “I see,” as the person is talking.  Following it up with a summary of what you believe you heard to be sure you are not misconstruing what was told to you, and then finally giving your answer.  It shows respect and ensures you and the speaker are on the same page.

The Spectrum of Primary Emotions
According to Robert Plutchik, just as there are primary colours in the spectrum which are combined to create all other colours, so there are eight “Primary Emotions”: Joy and Sadness, Anger and Fear, Anticipation and Surprise, Attraction and Disgust (“The Nature of Emotions”, American Scientist Online, July-Aug. 2001)

Active Observation means really looking at what people are communicating besides their words.  It’s body language and tone of voice.  I once saw a teacher I knew walking in the hall with her shoulders hunched and slumped down.  It looked as though she was carrying a very heavy backpack.  I asked what was wrong and she first claimed it was an argument with her department chair (which probably occurred because of her mood).  I invited her into my library and asked what was really wrong. She fell apart and related a very difficult home situation.  I listened attentively.  Didn’t offer advice as it was beyond anything I had experienced but asked what resources she had available.  The encounter paved the way for many future connections and collaborations with her and her students.

Reasoning with Emotions sounds like a contradiction in terms, but recall (or go back and read) my blog on the Pareto Principle.  People make 80% of their decisions based on emotions.  They use their logic to justify their emotional decision.  If you are going to change someone’s mind about the value of libraries, you need to find the right emotional triggers for that person. Emotion controls how we feel about any task and affects the result. Remember, “if you think you can or think you can’t, you are probably right.”

Understanding Emotions can be difficult as we can easily get caught up in the drama of the situation.  When someone lashes out at us we tend to respond offensively or defensively depending on our nature.  Understanding Emotions requires you to take a step back and recognize you are most likely not the true cause of the outburst.  Focus on what is actually being said – the message rather than the delivery- and respond to that.  By not engaging the other party, you can often diffuse the situation.  Understanding Emotions also means recognizing someone who is constantly cheerful but still manages to keep distant is often also carrying a burden.  Being able to under the masks people wear clue you in as to when and how to best communicate with them. 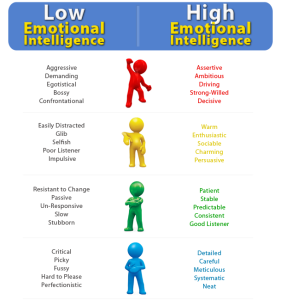 Managing Emotions is where EI gets personal.  How do you manage yours?  You can’t afford to lose your temper or to sulk when things don’t go your way.  Recognize what is your best way of blowing off steam.  Some choose a physical activity, some journal, some call a trusted friend or mentor and vent. You can’t manage and deal with the emotions of others unless you can handle your own emotions.

In what area do you have a high EI?  What do you need to work on?  By observing your own behaviors, you can do much to improve your EI.