We have just finished the annual Banned Books Week and social media sites have been filled with lists of titles that have been banned currently or over the years.  Librarians and non-librarians have expressed their incredulity and horror over what has been challenged or removed from library shelves.  I, too, joined in the frenzy of re-posts. It is important to raise awareness of the efforts of some to deprive the many of whatever they find offensive

But the issue is far larger. Banned Books Week is a personal reminder of why I am so proud to be a librarian.  Chatter on the social media is easy, but being a bastion for intellectual freedom and freedom of access to information can be both challenging and frightening. While our everyday workload may be hard, it is nothing compared to what it takes to stand against censors. 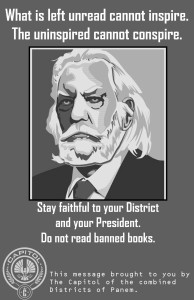 Every year ALA and its divisions, including AASL (American Association for School Librarians) present an Intellectual Freedom Award to a librarian who stood up for ALA’s Code of Ethics and most particularly the Library Bill of Rights.  Most state library associations have the same award.  I have known at least one recipient personally, and while she got support from ALA’s Office of Intellectual Freedom and from her state organization, she said it was lonely and she was often fearful.  She had a positive outcome, and the challenged books were re-instated in the library.  Even better, she was a role model for her students.  But, it was a very difficult time.

Sitting alone and selecting which books to order, librarians quietly face the dilemma of whether to adhere to the strong beliefs which are a foundation of our profession or take the easy way out.  Many decide it isn’t worth the risk, rationalize their budgets aren’t large enough to buy all the books they would like, and pass over titles on LGBTQ subjects or other hot-button issues in their communities.  No one knows of their individual decisions.  There are no consequences for their action or inaction – except for a student or patron who doesn’t get access to much needed information and/or reassurance.

Those who would remove books often point to librarians’ decisions on what to purchase and what not to buy, claiming it, too, is censorship, but they miss a fundamental point.  Book selection—which is what librarians do—is based on the merits of the work as a whole and whether it serves the library’s population. Censorship focuses on snippets—a word, picture, or idea-found unacceptable. It seeks to impose what should be a personal decision on all the library’s users.  As a guide, many of us hold that every library should have something that offends someone – including the librarian who purchased it. I have had works by Klansman and other equally personally offensive titles in my libraries because it was my responsibility to present a broad range of viewpoints.

So as another Banned Books Week comes to an end, I want to honor and celebrate the courageous librarians who take on the toughest aspect of our profession.  I hope those of you who are librarians are equally brave. For non-librarian of this blog, I wish you have these librarians in charge of the library you use.